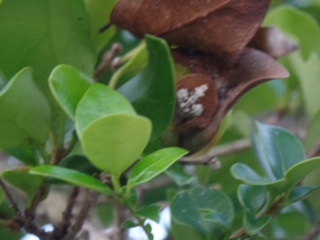 So this beauty (above) showed up in the tree right outside my house. We might not have even noticed her, except that she builds a very large web across the walkway between our driveway and front door every night. Yes, at night, when you can’t see very well. And she leaves the web up until sunrise, so she’s still there at 6:30 every morning when my son and I leave to take him to school. Which is also before I’ve had more than a sip of coffee, and an hour when no humans should be facing danger in the environment.

As a child I was deathly afraid of spiders. I would scream like I was being stabbed to death at the sight of a daddy longlegs. There was no such thing as a good spider. I despised the way they could sneak up on you, so lightweight and inconspicuous. I hated how all those legs moved in unison to speed the spider to safety before I could stop screaming and find an adult to “deal” with it. I was a completely nonviolent, animal lover even then, except when it came to spiders.

Fast forward a few decades. I decided I could practice what I preach about facing your fears. I raised my kids to appreciate all of nature. We escort bugs and lizards out of the house back to the natural environment. It’s an event if there’s a frog, snake or other creature outside. We all pile out of the house to have a look. At three, my son asked me if spiders had blood, which prompted a trip to the library to figure it out.

So, the spider stays no matter how much it invokes terror in my nervous system on a nightly basis. I decided I had to make peace with her. Yes, we’ve thoroughly and easily, researched her, thanks to the internet. She’s a female orb weaver, originally of Panamanian descent, and she’ll be around until late October or November. Which means she’ll only get bigger over the next two months, and she’s already big enough, that when we shine a light on her, it casts a shadow the size of a small dog on our house. One report said she will bite but is equally likely to drop to the ground and play dead, if threatened. A spider that imitates a possum. She can definitely stay. In fact, we’ve named her. Charlotte, of course. And I’ve now documented her entire day. I know which leaf she sleeps on by day. We’ve figured out that she builds her web

exactly at dark and takes it down exactly at dawn every day, unless it rains. And we remind each other to “watch out for Charlotte” when we go out and come in. I’ve faced my fear, and named my spider, but I can’t guarantee I won’t have a heart attack if I run into her, even if she’s going to play dead before or after she bites me.

When facing your fear of anything:

Steps 1-6 above can put you well on your way to successfully defeating any fear. When you realize nothing happens that you can’t handle from the thing you fear, it loses its control over you and goes away. While Charlotte isn’t holding me back from achieving a goal, we have many fears that terrorize our success. And, practice facing your fears, even in eight-legged form, is a challenge you want to accept. It becomes easier with practice, just like everything else. And before you know it, you feel powerful enough to accomplish anything, unburdened.

The next fear I’m going to obliterate is stand up paddle boarding on water that is featured on Shark Week every summer. I’m clumsy by nature, don’t swim that well and don’t like to be on the water when I could stay beside it. The benefit is a beautiful view and reinforcing that I am more powerful than I think. If I can do that, then surely I’m good enough. I can do anything. After that, speaking in public.
What fear are you going to CRUSH, just because you can?